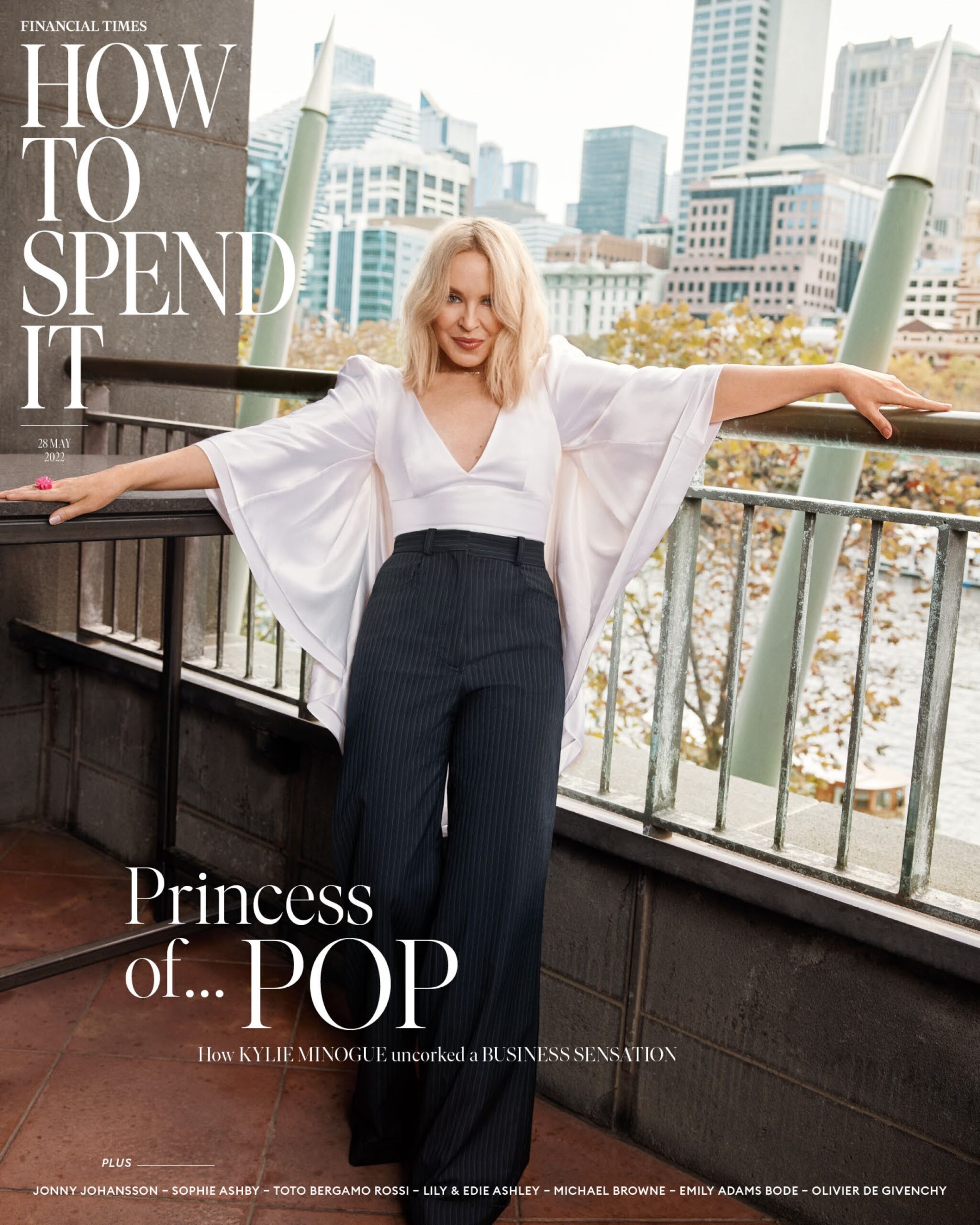 Few celebrities seem to elicit the kind of dewy-eyed adoration from such a broad spectrum of people as Kylie Minogue. The Australian megastar, known to most as Kylie, first won fans over as the fiery yet lovable Charlene Robinson in soap opera Neighbours in the 1980s, before morphing into a singing sensation, creating disco-infused pop bangers that have topped charts around the world and coaxed even the most curmudgeonly onto dancefloors.

Now she’s on the cusp of another reinvention. She’s traded her gold hot pants in for more office-appropriate attire to get stuck into her new business, Kylie Minogue Wines – a range including Côte de Provence rosé, Australian Chardonnay and Pinot Noir and Italian prosecco. It first launched in 2020 and will be available to buy in the United States from next month.

Minogue has also moved back to Melbourne, where she was born in 1968 and where her parents and siblings are still based, having lived in London for more than 30 years. “I think my life is better like this,” she says of her decision to relocate. “We’ve all had time to stop and really assess where we are and what’s missing, and what balance could be better. But I still feel like there’s the very tippy-toe of a stiletto that’s still very much in London.”

Despite having a wholly different upbringing than most – she appeared in The Sullivans aged 11, and had parts in Australian productions throughout her adolescence – she did partake in that all-too-familiar teenage pastime of drinking “very ordinary wine and not really understanding what it’s about”. Her tipple was cheap and cheerful Lambrusco, which, she admits, was probably better than the “horrible mixed drinks” that were prevalent at the time.

Michelle Tran Minogue came to properly appreciate wine at 21 when she began dating Michael Hutchence, the late member of Australian rock group INXS, with whom she travelled the world. “That’s when I would really say that it became romantic and expressive. I can’t remember the name of the wine, or the restaurant we were at, but I remember being in the south of France or in Italy, and it felt like we were in a movie. Sometimes the bottle of wine is almost like another guest at the table.”

She first toyed with the idea of having her own wine range in 2017, while recording her album Golden in Nashville. “We were there in the peak of summer, absolutely sweltering, and we would just dine alfresco every day, more often than not with a rosé,” she recalls. “One of those nights, I had my glass and the light was falling on it, and I remember how wonderful I felt during that period in my life – I just loved being there and writing – and I had this really restorative, amazing time. And I remember saying, ‘I’d love to have my own rosé one day.’ And the seed was planted.”

Minogue develops her wine range with London-based Benchmark Drinks, working with CEO and founder – and fellow Aussie – Paul Schaafsma, who also produces Gary Barlow Organic and Gordon Ramsay Wines. “Before I met her, I’d been thinking about people that I’d like to do a rosé with, and Kylie was at the top of that list,” says Schaafsma. “She’s about fun, music and partying.”

It’s easy to see the appeal – if you’re already spinning around to her tunes, why not let her provide the booze too? But more than that, having a name like Minogue lends familiarity and – let’s be honest – accessibility to an often-intimidating industry. “In the UK, 93 per cent of consumers will never visit a winery, meet a winemaker or see a vineyard in their lives,” says Schaafsma. “Their whole experience of wine is walking down the supermarket aisle thinking, ‘Oh my God, don’t pick the wrong one.’ And a lot of the brands don’t resonate with them. So if they pick up the bottle because they know Kylie, and if we put the right wine that’s exactly the right quality in the bottle, they’ll come back again.”

Certainly, it’s good to be a celebrity in still and sparkling wine, the global consumption of which is forecast to reach $207bn by 2022, according to IWSR Drinks Market Analysis. Look to Miraval, previously co-owned by Brad Pitt and Angelina Jolie, whose first 6,000-bottle run in 2013 reportedly sold out in five hours, and which Stoli Group’s wine division Tenute del Mondo bought a 50 per cent stake in in 2021 (Pitt’s Fleur de Miraval Rosé Champagne was also served at the Oscars this year, a domain previously owned by Piper-Heidsieck). Or Armand de Brignac, the champagne brand better known as the Ace Of Spades, that first began selling in 2006 but saw an uptick in consumer interest when Jay-Z – who first promoted the gold bottle in a 2006 music video – bought the company in 2014; last year, LVMH took a 50 per cent stake in the brand.

There has been a marked increase in celebrity-owned, invested or endorsed brands over the past few years,” says Brandy Rand, IWSR Drinks Market Analysis COO of the Americas. “This new wave is implicitly tied to lifestyle and has been a winning formula for some alcohol brands. From Kendall Jenner’s tequila to ASAP Rocky’s Canadian whisky to Cameron Diaz’s wine, these celebs are taking on ownership and creative roles, which is much more beneficial to alcohol marketers and ultimately more credible in the eyes of consumers.”

Minogue’s wines are flying off the shelves. Benchmark reports that, based on the past 12 months of sales, someone drinks a glass of Kylie Minogue Wines globally every 1.5 seconds, while her Signature Rosé is the top-selling in its category in the UK above £7, according to Nielsen EPoS Sales data. And Kylie Minogue Prosecco Rosé is the top-selling branded prosecco rosé in the UK, with 16.2 per cent market share. “In my 25 years in the wine industry, I have never experienced such an overwhelming response to a brand in its first two years,” says Schaafsma. “Selling more than five million bottles globally is testament to Kylie’s commitment and the incredible producers we work with.”

Minogue may not be making the very finest wine – you can pick up a bottle of the Côte de Provence Rosé for £18 at Morrisons – but it is quality enough for The Carlyle hotel in New York and Annabel’s in London, where it’s the pouring rosé of choice; Clement Robert MS, wine buyer for The Birley clubs, says it’s “on a similar level of most established brands in the region, showing lovely concentration of summer red fruits, a refreshing texture and a complex lingering finish”. She’s also earned industry acclaim, winning Liquid Icons’ Wine Entrepreneur Award last year, with co-founder and CEO Lewis Chester commenting: “Kylie Minogue Wines have taken the world by storm. It’s nothing short of miraculous, the likes of which might never be seen again.”

“It was almost like me going to the Oscars, but I’ve never seen a movie or I’ve got a DVD player and I’ve seen some of the classics,” says Minogue of attending the industry event. “I was completely starstruck with all the people who were in this heaving, heaving [room at] Annabel’s. I said in my terrible [acceptance] speech that I felt like I was pulling up my school socks; I really was the brand new kid on the block.”

So, what does Minogue know about winemaking? Not all that much, she admits, but she’s mucking in, visiting the vineyards, meeting the winemakers and learning the history behind each of the wineries. “I haven’t been for a harvest yet – that’s what I’m hoping I can experience when I come back to Europe,” she says. “It’s a different world to what I spent my life doing, yet now I’m seeing the similarities about how it connects with people and becomes part of their experiences.” She also likens being on a vineyard to performing. “It did feel a bit like being on stage, versus backstage; you’ve got the beautiful presentation with the cellar door, where you just drink wine and have this amazing experience, and then there’s behind the scenes – I have so much respect for all the people who work in this industry because it’s not easy,” Minogue adds.

Quite apart from her long and lucrative pop career, which has seen her sell more than 80 million records worldwide and become the first female artist to have number-one albums in the UK across five decades, Minogue has proven herself an astute businesswoman. She’s made Kylie spectacles and sunglasses with Specsavers, multiple fragrances with Coty, a collection of homeware and bedding (Kylie Minogue At Home) and a lingerie line named Love Kylie. She also has a small make-up line – mostly glittery eyeshadow and lipgloss ripe for the club – that she released in 2019 after a copyright battle with Kylie Jenner, the beauty mogul member of the Kardashian family, who tried and failed to trademark the name “Kylie”.

Such broad business ventures could be perceived as a stretch, or lacking in focus. But the world’s adoration for her seems unwavering – and goes way beyond one fixed fanbase. “I remember being 11 years old and watching the ‘Can’t Get You Out of My Head’ video for the first time,” says 31-year-old actor and musician Olly Alexander, who released the single “A Second to Midnight” with Minogue last year. “It was her free spirit, sexiness and joy that captivated me. We all love Kylie because we know she would never judge us, she radiates kindness and self-knowledge, she’s been through a lot and she wants the best for us,” he adds. “That’s why she’s a queer icon.”

“I think I have a long-standing relationship with the public,” says Minogue of her appeal, “so I think it’s about my reach and people willing to take a chance on me. I think with a bottle of wine, Gran and Gramps love it, parents love it and the younger generation are lapping it up as well.”

Business ventures aside, Minogue is planning to get back in the studio, having recorded and released her latest album, Disco, under lockdown. And for fans of Neighbours, which was forced to shut down production earlier this year after UK broadcaster Channel 5 decided to stop airing it, Minogue is reuniting with her on-screen romantic partner Jason Donovan for a one-off series finale of the show.

Of her new life, Minogue says: “This is another iteration. [Kylie Minogue Wines] will be a lot easier on my body than touring. But I’m also a sucker for punishment and I can’t wait to perform again.”